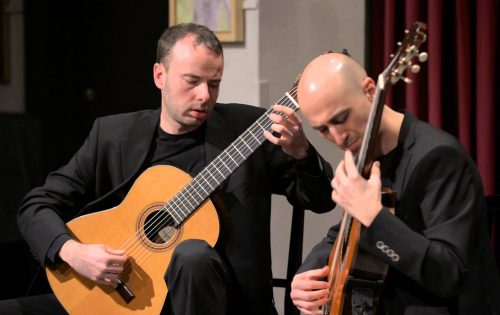 As SoloDuo, Matteo Mela and Lorenzo Micheli have performed throughout Europe, Asia, the USA, Canada and Latin America, and have been acclaimed everywhere – from New York’s Carnegie Hall to Seoul’s Sejong Chamber Hall, from Kiev’s Hall of Columns to Vienna’s Konzerthaus – as one of the best ensembles ever heard. About one of their performances, “The Washington Post” wrote: “the duo’s playing was nothing less than rapturous – profound and unforgettable musicianship of the highest order.”

In addition to classic, romantic and modern repertoire, Matteo and Lorenzo – joined by lutenist Massimo Lonardi – have extensively explored Italian music from the XVII and XVIII century for baroque guitar and theorbo. Together, Matteo and Lorenzo have recorded François de Fossa’s Three Quartets, op. 19 (2004), a CD of 17th Century Italian music for baroque guitar, archlute and theorbo (“La Suave Melodia” with Massimo Lonardi, 2008), a CD of Arias and Cantatas by Alessandro Scarlatti (“Clori, ninfa e amante”, 2013), an anthology of 20th Century masterpieces for two guitars (“Solaria”, 2007), the Duos Concertants by Antoine De Lhoyer (2007), a collection of chamber works by Mauro Giuliani (2008), a collection of 19th Century pieces for two guitars (“Noesis”, 2009), the Sonatas of Ferdinand Rebay (2010), the 24 Preludes and Fugues by Mario Castelnuovo-Tedesco (2012), and the album “Metamorphoses” (2014), as well as a dozen solo recordings on the labels Naxos, Brilliant, Contrastes, Kookaburra, Mel Bay, and Stradivarius.
They are the Editors of the “SoloDuo Collection” for the Canadian publisher Productions d’Oz.