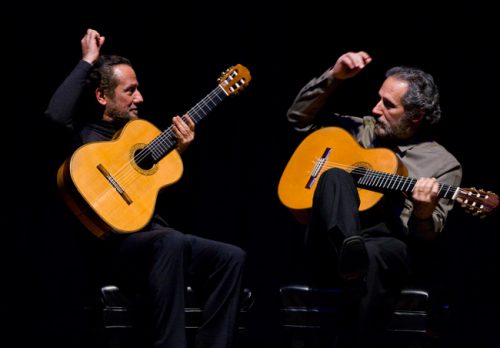 Their exceptional artistry and uncanny ensemble playing come from both a family rich in Brazilian musical tradition and from studies with the guitar/lutenist Monina Távora (1921-2011), a disciple of Andrés Segovia. In addition to setting new performance standards, the Assads have played a major role in creating and introducing new music for two guitars. Their virtuosity has inspired a wide range of composers to write for them including Astor Piazzolla, Terry Riley, Radamés Gnattali, Marlos Nobre, Nikita Koshkin, Roland Dyens, Jorge Morel, Edino Krieger and Francisco Mignone.Brazilian-born brothers Sérgio and Odair Assad have set the benchmark for all other guitarists by creating a new standard of guitar innovation, ingenuity and expression.

Now Sérgio Assad is adding to their repertoire by composing music for the duo and for various musical partners both with Symphony Orchestra and in recitals. They have worked extensively with such renowned artists as Yo-Yo Ma, Nadja Salerno-Sonnenberg, Fernando Suarez Paz, Paquito D’Rivera, Gidon Kremer and Dawn Upshaw.

The Assads began playing the guitar together at an early age and went on to study for seven years with Dona Monina. Their international career began with a major prize at the 1979 Young Artists Competition in Bratislava. Odair is based in Brussels where he teaches at Ecole Supérieure des Arts. Sérgio resides in San Francisco, where he is on the faculty of the SF Conservatory.

The Assad’s repertoire includes original music composed by Sérgio Assad and his re-workings of folk and jazz music as well as Latin music of almost every style. Their standard classical repertoire includes transcriptions of the great Baroque keyboard literature of Bach, Rameau and Scarlatti and adaptations of works by such diverse figures as Gershwin, Ginastera and Debussy. Their touring programs are always a compelling blend of styles, periods and cultures.

The Assads are also recognized as prolific recording artists, primarily for the Nonesuch and GHA labels. In 2001, Nonesuch Records released “Sérgio and Odair Assad Play Piazzolla,” which later won a Latin Grammy. Their seventh Nonesuch recording, released in the fall 2007, is called “Jardim Abandonado” after a piece by Antonio Carlos Jobim.  It was nominated for Best Classical Album and Sérgio went on to win the Latin Grammy for his composition, “Tahhiyya Li Oussilina.”

A Nonesuch collaboration with Nadja Salerno-Sonnenberg in 2000 featured a collection of pieces based on traditional and Gypsy folk tunes from around the world. In 2003, Sérgio Assad wrote a triple concerto for this trio that has been performed with the orchestras of São Paulo, Seattle and the Saint Paul Chamber Orchestra.  In the summer of 2004, Sérgio & Odair arranged a very special tour featuring three generations of the Assad Family. The family presented a wide variety of Brazilian music featuring their father, Jorge Assad [1924-2011] on the mandolin and the voice of mother, Angelina Assad. GHA Records has released a live recording and a DVD of the Assad Family live at Brussels’ Palais des Beaux-Arts.  In the 2006-2007 season, the Assad Brothers performed Joaquin Rodrigo’s “Concierto Madrigal for Two Guitars” and Sérgio’s arrangement of Piazzolla’s “Four Seasons of Buenos Aires” with the Los Angeles Philharmonic at the Hollywood Bowl.   The Assads were also featured performers on James Newton Howard’s soundtrack to the movie “Duplicity,” starring Julia Roberts and Clive Owen. In the 2010-11 and 2011-12 seasons, the brothers toured a project entitled “De Volta as Raizes” (Back to Our Roots) featuring Lebanese-American singer Christiane Karam, percussionist Jamey Haddad and composer/pianist Clarice Assad.

In February 2011, Odair Assad performed his first solo guitar concert tour in North America featuring concerts in New York and Montreal. Sergio Assad has written another concerto for his duo, called “Phases.”  It was premiered with the Seattle Symphony in February 2011. In the meantime he has been nominated for yet two more Latin Classical Grammys in the Best Classical Composition Category for his piece for the LA Guitar Quartet and the Delaware Symphony entitled, “Interchange” and for “Maracaipe” for the Beijing Guitar Duo.  In the fall of 2011, five of the members of the Assad family: Sergio, Odair, Badi, Clarice and Carolina – joined together again for another evening of new and favorite Brazilian works.  Their tour included stops in Qatar, Sweden, Germany, The Netherlands (to open the “Brazil Festival”) at The Amsterdam Concertgebouw and three concerts in Belgium with a finale at Le Palais des Beaux Arts in Brussels.

The Assad Brothers collaboration with cellist Yo-Yo Ma is ongoing. In 2003 the Brazilian record “Obrigado Brazil” was released featuring Rosa Passos, Egberto Gismonti and Cyro Baptista. Sérgio arranged several of the works on the disc, which captured a Grammy in 2004.  In 2009, the brothers were featured on Yo-Yo Ma’s chart topping release, “Songs of Joy & Peace,” which features other guest artists as diverse as James Taylor and Dave Brubeck.  In the piece “Família” Yo-Yo plays Sérgio’s composition featuring mother, Angelina Assad, sister Badi and children Clarice, Rodrigo and Carolina.  The release topped both the classical and the mainstream Billboard charts and won a Grammy for Best Classical Crossover.  In April 2012, Sergio and Odair toured North America with Yo-Yo Ma and pianist Kathryn Stott, in a program of Latin American works as arranged by Sergio as well as some of his original compositions, highlighted by concerts at the new Smith Center in Las Vegas and Chicago’s Symphony Hall.

In October of 2012, Sérgio and Odair premiered a performance of a new duo guitar concerto written for them by Sergio’s daughter Clarice Assad, at the Pro-Musica Chamber Orchestra in Columbus, Ohio.  Soon after, the brothers returned to the University of Arizona in Tucson as visiting artists with support from the D’Addario Family Foundation.  They headlined the 4th International Tucson Guitar Festival with two performances at Holsclaw Hall and master classes for advanced guitar students.  In the spring of 2013, Sergio and Odair planned another tour of their much loved trio with the inimitable Paquito D’Rivera as well as a record release of their project, “Dances from the New World.” In 2014, the brothers began a Brazilian Tour that celebrates 50 years of their career. In 2015, the tour continues, spanning a total of 27 Brazilian cities.

A kind of wizardry lies within the playing of Sergio and Odair Assad… they produce a supple, flawless unified sound. – The New York Times

Because they have been performing together for most of their lives, and because they play from memory, there is a lively interaction between them that creates the impression that they are improvising like a couple of virtuosic, perhaps even telepathic, jazz players. – The New York Times

… the best two-guitar team in existence, maybe even in history… no amount of anticipation could have prepared me for the Brazilian brothers’ daringly flexible, eerily unanimous ensemble playing. – The Washington Post

As performers, these two play like the close brothers they are. They pick up instantly on the other’s cues, respond as if intuitively and seem to be wired in to the same operating system. What’s projected is a sort of ‘ëuber-guitar,’ two instruments and one brain. – The Washington Post

Call it one of the most engaging musical presentations of the season. Better yet, call it a stunning display of the music of the Western Hemisphere. – The Los Angeles Times

They aren’t just soloists but a two-man, multi voice band of soloists who play instinctively well together, with consistent rhythmic intuition and soul. – The Los Angeles Times

The Assads’ virtuosity left the many guitarists in the crowd, including me, awe-struck. Their speed, their gorgeous tone, their uncanny musical memories (not a page of music appeared on the stage), and their ability to play thousands of notes without a single clinker, click or buzz are the stuff of guitar gods…an inspiring concert that celebrated the swooping energy of musical phrases and the irresistible beauty of the sound of two guitars – Milwaukee Journal Sentinel

…Sergio and Odair, two of the finest guitarists on the planet. – Journal Sentinel

Throughout the concert, the brothers played as one… This was two persons, four hands, one mind. – Seattle Post-Intelligencer

…it’s not hard to imagine that acoustic guitar music, when in the hands of masters like Sergio and Odair Assad, is a musical window into the heart. – The New Jersey Star- Ledger

AN APPRECIATION
By Benjamin Verdery

It’s January 23, 1980. The phone rings. I pick it up only to hear my downstairs neighbor and dear friend Tom Humphrey’s voice.

Tom was on a path to becoming one the most celebrated guitar makers of his generation and of the world in general. His apartment, 120 West 72nd Street, #2C, had became a vortex for all things related to the classical guitar.

The Assad brothers had just arrived in New York to give their American debut at 92nd Street Y as part of the wonderful Classical Guitar at the Y series, sponsored by Augustine Strings. So it was a given that the Assad Brothers would visit Tom. In fact, Sérgio and Odair went on to record and perform throughout the world on Tom’s guitars as well as becoming very dear friends with him and his family.

I went down three flights to Tom apartment, as I lived above him in #5C. I entered, and there were the Brazilian brothers on the couch, each with one of Tom’s latest creations in their hands. Within no time they began to play Leo Brouwer’s Micropiezas from memory.

From that point on, my entire concept of the guitar’s sound, articulation expressivity and repertoire was turned upside down. I had never heard the classical guitar played in this brilliant manner and certainly never heard a duo remotely on the level of virtuosity and artistry they displayed.

The following evening was the actual 92Y concert. In short it was a game changer for all who attended. The audience and we guitarists in general experienced a concert the likes of which we had never before heard. All were completely inspired by the vitality and commitment they gave to the music.

Even The New York Times agreed, writing in its review that “…they play like twins, with an ensemble that is virtually perfect. And their technique is a marvel.” The Assads singlehandedly went on to make the concept of a guitar duo as a viable concert attraction in a way it had never been. All duos that have arrived since are in some way directly influenced by their life’s work.

The name Assad has become synonymous with the names of Segovia, Bream, Williams and Romero. Sérgio has become the most influential guitar composer since Leo Brouwer. Odair rapidly distinguished himself as one of the greatest virtuosi of his or any generation.

Together, they completely changed the landscape of the classical guitar and its repertoire. In addition to their playing, Sérgio and Odair are two of the warmest and most generous people any one could know. In a word, they are beloved. It is a great honor for all of us here at 92Y to present this concert celebrating their 50 years of concertizing. We can only bow to them and say a huge thank you for all the music they have given us. We do however have one request. Please brothers Assad, give us another 50 years at least!!

– Benjamin Verdery is artistic director of the 92Y Art of the Guitar series and chair of the guitar department at the Yale School of Music.