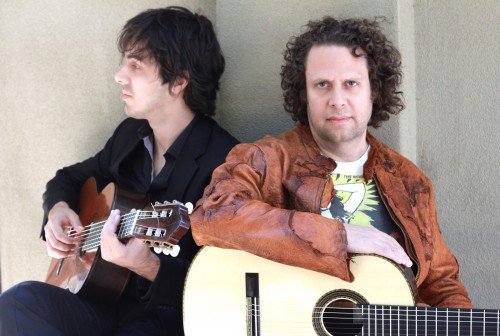 In a new and exciting collaboration, guitarists Adam del Monte and Mak Grgic team up for a fresh and spontaneous duo, with their program “La Buena Vida”, taking you on a journey through Latin American and Spanish landscapes. Brand new arrangements of Guastavino, Granados, Albeniz, traditional Argentinian Tangos and original flamenco compositions by Adam del Monte, cast a renewed spirit into the world of the guitar duo expressed through two dynamic artists, each with their own voice.

Because a path of musical diversity has opened up in recent years in classical music and the classical guitar world there is space for a path of versatility and inclusiveness. In this program that Mak and Adam are offering, you will find a wide array of styles and flavors, ranging from the tradition of the Spanish “romantics”, like Albeniz and Granados; to the more 20th century edginess of Ginastera, the populism of Guastavino, to the out right vanguard of progressive flamenco compositions by Adam del Monte, arranged by him for two guitars. Mak, being a young and versatile classical guitarist with much experience in other styles, offers the perfect complementary counter balance to del Monte’s style.  In a world of guitar duos, this one sounds completely fresh and rooted in attention to detail.

Both Artists are inspired and versatile guitarists, with a boundaryless approach to their instruments. The New York Times called Mak “imaginative” and “expressive,” and Classics Today proclaimed that “Mak Grgic’s abundant, yet tasteful guitar virtuosity leaves a powerful impression.” Mak’s repertoire spans centuries of music, and after performing the music of Sylvius Weiss at the National Gallery of Art in Washington D.C., the Washington Post called him “A guitarist to keep an eye on.” His first commercial CD, Cinema Verismo has been heard in the United States and Canada on hundreds of radio stations. It has been a CD of the week and a download of the week on many NPR Stations. Mak has also taken to performing some of the great contemporary composers of our time, including Michael Gordon, Salvatore Sciarinno and Mario Davidovsky, and will be playing contemporary guitar duos with Dan Lipel. Mak also performs duos with Martin Chalifour, concertmaster of the Los Angeles Philharmonic.

A composer in his own right, Adam Del Monte who has toured the world and recorded Osvaldo Golijov’s: Ainadamar with soloists such as Dawn Upshaw, lives and breathes the type of versatility that defies definition. He is more than a Flamenco master, taking latin and classical music and crossing it with influences from the Middle East. Classical Guitar Magazine stated emphatically, “And then there’s the Albeniz. If ever a composer was done to death on the guitar, it was surely he. And then along comes Del Monte with readings which give these tired old warhorses life anew. After a truly breathtaking Castilla, one naturally fears that he has peaked too soon, but the incredible Sevilla eliminated any such doubts. If any performer on any instrument has presented this work with such energy and brilliance, then it has escaped my notice.” The LA Times said of his work . “Flamenco has always been a world unto itself, so it’s news when artists of great technical and stylistic authority stretch beyond its limits to incorporate outside traditions.” In [his] “Flamenco Fusion,” guitarist Adam del Monte did just that, layering jazz, Middle Eastern and Western European Gypsy influences without blurring [its] powerful flamenco impetus.”

Highlighted Reviews of Adam and Mak

“[On] Cinema Verismo…rest assured the 14 tracks add up to a well-contrasted and satisfying hour-long recital. More importantly Mak Grgic’s abundant, yet tasteful guitar virtuosity leaves a powerful impression…The accompanimental clusters in Granados’ Spanish Dance No. 5 provide an urgent commentary alongside the curvaceous main tune…Grgic brings understated eloquence to a simple and effective arrangement of Bernstein’s “Somewhere” from West Side Story…Aside from Grgic’s own talent for nuance and multi-hued voicings, the coloristic variety also is due to his use of different instruments throughout the recital.” Classics Today, Jed Distler

“Flamenco has always been a world unto itself, so it’s news when artists of great technical and stylistic authority stretch beyond its limits to incorporate outside traditions. In [his] “Flamenco Fusion,” guitarist Adam del Monte did just that, layering jazz, Middle Eastern and Western European Gypsy influences without blurring [its] powerful flamenco impetus.” LA Times

The Washington Post proclaimed: (after a concert at The National Gallery in 2012) “He turned in a beautiful account of Weiss’s six-movement “L’Infidel” suite, exploring its contrasts and fascinating twists and turns – from the deeply personal Sarabande to the slow-gathering power of the Paisanne – with real intelligence. And Weiss’s Passacaglia in D Major (a masterwork if there ever was one) may have been the high point of the evening; a superb, finely detailed reading that showed Grgic is a guitarist to keep an eye on.”  and The Herald Tribune of Sarasota proclaimed, ” his technique is impressive and the rich tone he drew from his instrument was often striking.” Read more reviews on his website.

“… the last Piazzolla performances I intend listening to for the foreseeable future should also rate amongst the finest. The success of Del Monte’s accounts derives largely from the fact that he chooses two of the more lyrical works, both of which remain relatively free of the stuttering tango rhythms found elsewhere. The fact that Del Monte is clearly a prodigiously talented guitar player might also have something to do with it. Despite my acquired indifference to Piazzolla, I was utterly captivated by these stylish and articulate interpretations. Likewise the Bach, in which I became increasingly convinced by Del Monte’s uncompromising approach to ornamentation. It is well documented that I usually prefer my Bach played straight (i.e. without the customary surfeit of musical cherries on sticks and cocktail umbrellas), but Del Monte applies the bells and whistles with disarming flair and imagination. As a composer, Del Monte proves to be resourceful and imaginative. If the two original works presented here emerge as the least memorable items on the agenda, then it is only because Del Monte handles other people’s work so consistently well. And then there’s the Albeniz. If ever a composer was done to death on the guitar, it was surely he. And then along comes Del Monte with readings which give these tired old warhorses life anew. After a truly breathtaking Castilla, one naturally fears that he has peaked too soon, but the incredible Sevilla eliminated any such doubts. If any performer on any instrument has presented this work with such energy and brilliance, then it has escaped my notice. A magnificent debut from a guitarist with all the hallmarks of a major world talent.” Classical Guitar Magazine

“Following in the footsteps of fellow Balkan virtuoso Milos, Slovenian guitarist Mak Grgic’s talents are showcased on a cleverly compiled selection of classical pieces familiar from the Movies–not just the mandatory Cavatina, but orchestral pieces ingeniously arranged for solo guitar…the poignancy of Moricone’s Gabriel’s Oboe is deftly sustained by the solitude of solo guitar, Elsewhere, Nino Rota’s Godfather’s Waltz is even more stately than in the film, while Albeniz’s Asturias allows Grgic to indulge the core classical repertoire.” The Independent, U.K., Andrew Gill

Grgic has performed with orchestras such as the Spokane Symphony at The Festival at Sandpoint under Maestro Gary Sheldon, conductor of The Miami City Ballet, as well as the festival orchestra at Lancaster Festival, The RTV Slovenia Symphony Orchestra under Maestro Ivo Lipanovic, the Croatian Chamber Philharmonic with Maestro Mladen Tarbuk, the SNG Maribor Symphony Orchestra under Maestro Simon Krecic and St. Petersburg Symphony with conductor Vladimir Lande, former principal oboe of The St. Petersburg Philharmonic.

Mak has been a young artist in Residence at The Da Camera Society of Los Angeles, and is a co-founder of DC8, Da Camera’s contemporary music ensemble, which strives to expand the definition of what a modern music ensemble can be. Of DC8, The LA Times called the players “skilled young musicians” they  were cited as an “inspiring addition to the contemporary music landscape in Los Angeles”

Born in Ljubljana, he studied in Zagreb with the revered Ante Cagalj at the Elly Basic Conservatory of Music and obtained his Bachelor’s Degree with Alvaro Pierri at the Universitaet fuer Musik und darstellende Kunst in Vienna, Austria. At the moment he is pursuing his Doctoral Degree at the USC Thornton School of Music as a student of William Kanengiser, Scott Tennant of the Los Angeles Guitar Quartet and Brian Head, Assistant Dean at USC Thornton School of Music and Artistic Director of Guitar Foundation of America.

He is currently a teaching assistant under the direction of Brian Head. His charitable activities include fundraising for Bosnian children with financial issues, including a recent recital in Zenica, BIH, where he raised funds for a local orphanage.  Mak is endorsed by both Savarez and D’Adarrio strings. He currently performs on an Antonius Müller, 2009. He has also been endorsed by Slovenian Luthier Samo Sali.

Born in Israel, but having grown up in Spain, Germany England and Holland, del Monte has learned the art of flamenco by living in the caves of Sacromonte in Granada Spain in his early childhood. His classical studies took place in Israel with maestro Menashe Baquiche and the Talma Yelin High School of the arts. Adam teaches Flamenco and Classical guitar at the U.S. C. Thornton School of Music. He plays a Tomas Delgado – which bares his name. It was made in 2013.