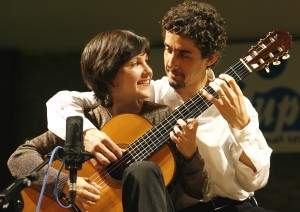 The guitar duo of Cecilia Siqueira and Fernando Lima began this work in the end of 2002, one year after having shared the 1st prize as soloists, in the II International Guitar Competition PRO MUSICA/SESC, in Caxias do Sul (RS – Brazil).

Since the beginning, the duo is receiving exceptional critics, having a quickly national and international projection and today is considered one of the most important Brazilian chamber groups.

Having recorded two CDs, being the last one, Lado a Lado (Side by Side), dedicated to the Brazilian music, with their own arrangements of great popular composers themes, like Cesar Camargo Mariano, Dominguinhos, João Bosco, Gilson Peranzzetta, Sivuca, Hermeto Paschoal, Pixinguinha, Pattapio Silva among others.

In November 2007 they had their seventh tour in Europe where “Debut” in the National Concert Hall in Dublin-Ireland and in the Cultural Arts Center in Saint Petersburg-Russia. The Duo international carrier includes concerts in countries like Uruguay, Spain, Italy, England, Ireland, Austria, Switzerland, Hungary, Poland, Belarus, and Russia.

The duo has studied with the professor Henrique Pinto, as well as with Paulo Martelli and Fábio Zanon. In the eclectic repertoire of the group, besides original works, we can find transcriptions and arrangements of an immense variety of compositors from the Baroque till the Popular Brazilian Music. This repertory consists of great works like some Preludes and Fugues from the Well-Tempered Clavier by J. S. Bach, Sonatas by Domenico Scarlatti, as well as pieces from the Choro’s universe, with composers like Pixinguinha, Waldir Azevedo, etc.

For this versatility and serious work, the duo was cited in the Violão Pro magazine (November 2007), as “a great revelation of the Brazilian guitar”.