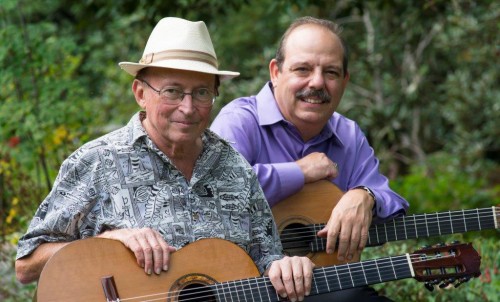 Celebrating twelve years of performing and recording as a duo, guitar virtuoso’s Carlos Barbosa-Lima and Larry Del Casale have been hailed on two continents for going beyond the everyday Classical guitar recital repertoire and transport their listeners into the swing of the Brazilian musical world and beyond.

Maestro Carlos Barbosa-Lima and Larry Del Casale were first introduced to one another in San Juan, Puerto Rico in 1997 by famed Puerto Rican composer Ernesto Cordero a dear friend to both Artists. At this time Mr. Del Casale was preparing a recording of Cordero’s music, the result was the acclaimed CD, Zenobia, and The Music of Ernesto Cordero.

“Carlos and Larry” as the duo is now referred to gave their first performance as a duo at Weill Recital Hall at Carnegie Hall in 2003 to a sold out house. The Duo returned again to Weill Hall in 2008 again to a sold out house. Since then Carlos and Larry have performed throughout Europe and the United States at dozens of Festivals and concerts including many club dates.

In 2013 Carlos Barbosa-Lima, along with Larry Del Casale and the Havana String Quartet, released “Beatlerianas” which was nominated for a Latin Grammy Award that same year.

Carlos Barbosa-Lima and Larry Del Casale differed somewhat from the previous groups. Primarily known as a soloist and arranger, Barbosa-Lima does perform with a backing band on many occasions, but here virtuoso guitarist Del Casale fills that role, and does so with panache and verve. The two-guitar format really lets Barbosa-Lima stretch out as an orchestrator. Rounding out their program was four of Leo Brouwer’s Micropiezas, written when the composer was a teenager, in a very mature and swinging reading. Seen and Heard

In a duo with Larry Del Casale, always in visual contact with each other, filled magnificent guitar sounds in a homogeneous match to the hall, so with “Sons de Carrilhoes” by Joao Pernambuco. Hot exotic sounds and rhythms created by the drummer Mauro Martins, who presented himself with a hand tambourine and subtly stated the rhythm. Three works by Antonio Carlos Jobim and “Tico Tico” could foam over the mood. Hersbruck Daily, Germany

All the solo guitar music here is excellent, as one expects from Brouwer. The Micropiezas for two guitars, which the booklet calls a tribute to Milhaud, are delightful tunes, the last of which will be very, very familiar to every listener … and is subjected to well-crafted variations. Earlier in the program we hear three short, excellent guitar solos which paint vivid images in sound.