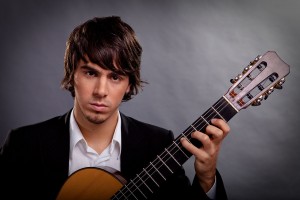 At 25, Mak GRGIC was recently hailed by the Washington Post as “a lyrical insightful player …as playing with “beauty” and “intelligence,” calling his interpretations nuanced and introspective.” Critic Stephen Brookes proclaimed his performance of Weiss’s Passacaglia in D Major a “high point of the evening” offering “a superb, finely detailed reading that showed Grgic is a guitarist to keep an eye on.”

Mak has been invited to venues worldwide, including the Sandpoint Festival with the Spokane Symphony, the Allegro Guitar Series in Texas, the National Gallery of Art in Washington D.C., the Newman Center for the Performing Arts, Denver, in performance with the Assad Brothers and cello super-star Joshua Roman for Strings on Fire, Strathmore Hall in North Bethesda, MD, Pepperdine University as a guest of Christopher Parkening, Portland Classical Guitar, Guitar Festival Mikulov, Piran Music Nights and The Sounds of Six Strings, Cankarjev Dom, Slovenia. As a new Young Artist in Residence at Da Camera Society of Mount St. Mary’s College in Los Angeles, he will appear with JACK Quartet in the premiere of a new work by composer and member of the Philip Glass Ensemble, David Crowell, and in recitals with the young, brilliant cellist Jeremiah Campbell.

He has performed at the Grande Auditorium di Espinho, Espinho and Teatro di Fafe, Fafe Municipality in Portugal, Teatro Cervantes de Bejar, Salamanca, Castile-Leon in Spain, International Music Council of the European Broadcasting Union in an all instrument “New Talent” Competition in Bratislava, representing the Republic of Slovenia, and a performance with RTV Slovenia Symphony Orchestra and Maestro Ivo Lipanovic – Gallus Hall, Cankarjev Dom, Ljubljana, Slovenia, The Dallas Opera with Chamber Orchestra in performances of Peter Maxwell Davies’ The Lighthouse, the Lancaster Festival in Ohio, where he performed Rodrigo’s Fantasia para un Gentilhombre, conducted by Gary Sheldon, conductor of the Miami City Ballet. Other dates include performances with the renowned JACK Quartet where they premiered a new guitar quintet by the most distinguished of young Slovenian composers, Nina Senk, as well as the Croatian Chamber Philharmonic in Europe and at the “Musica a 4 Stelle” summer festival in Grado, Italy, the Guitar Festival at William Patterson University in New Jersey, St. Donat’s Church in Zadar, Croatia, and the Atrium of the City Museum of Ljubljana, Slovenia. He has been reviewed and interviewed around the world by magazines, newspapers and radio stations such as KPBX in Spokane, Washington, UNIVOX and National Radio in Slovenia, National TV and Radio in Croatia, Thüringische Landeszeitung in Germany, Jutarnji List in Croatia, the popular family magazine Jana in Slovenia, Columbus Dispatch in Ohio, Classical Guitar Magazine in the UK and Il Messaggero and Chitarra Classica in Italy and The Washington Post.

He recently recorded music for the film Regrets of White Camellias staring Cybill Shepherd to be released in 2012.

Born in 1987 in Ljubljana, Slovenia, Mak follows in a distinguished line of some of today’s finest young guitarists emerging from the Croatian school of guitar. In Zagreb he studied with the revered Ante Cagalj at the Elly Basic Conservatory of Music and obtained his Bachelor’s Degree with Alvaro Pierri at the Universitaet fuer Musik und darstellende Kunst in Vienna, Austria. At the moment he is pursuing a Master’s Degree at the USC Thornton School of Music as a student of William Kanengiser of the Los Angeles Guitar Quartet. He is also a newly appointed TA at USC at the Thornton School of Music.