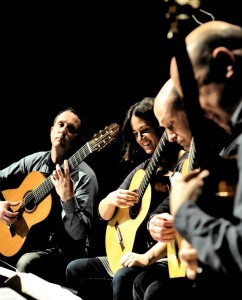 VIDAʼs ability to “conjure up an orchestral palette of colour and effects” (Classic FM) combined with their “exquisite tonal and dynamic control” has firmly established them as a passionate and masterful ensemble who sparkle with “vitality and spontaneity” (Acoustic). VIDAʼs seemingly effortless sense of ensemble and their broad range of timbres and dynamics evokes “listening to an entire orchestra and not merely to four guitars. Thereʼs only one word for it: magic” (Gramophone).

Since forming in 2007, VIDA has performed to critical acclaim in major UK venues including Kingʼs Place (London), The Sage (Gateshead) and St Georgeʼs (Bristol). They are sought-after festival artists throughout the UK and Europe and in 2011 VIDA made their US debuts in Los Angeles (LMU Guitar Festival) and New York (Baruch Performing Arts Centre). VIDA were recently artists in residence at CSU’s Summer Arts program in Monteray Bay CA.

Following on from their acclaimed debut CD, ʻLove, the Magicianʼ (BGS118) VIDA will be releasing their new CD, ʻRhapsodyʼ in 2013 featuring works by George Gershwin, Malcolm Arnold and Adam Gorb. VIDA are D’Addario string classical artists.

“Vida sparkled with vitality and spontaneity, weaving a rich tapestry of colour and breathtaking range of dynamics and percussive effects that held the audience spellbound … the visual interplay between them enhancing an already superb performance. These are outstanding musicians, if you can, go hear them play.” Acoustic

“exquisite tonal and dynamic control, super-tight ensemble and unerring musical instinct. Thereʼs only one word for it: magic” Gramophone

”VIDA conjure up an orchestral palette of colour and effects … they play with technical brilliance and precise ensemble, creating alternately smoky and glittering colours in Fallaʼs El amor brujo that suit the gypsy heart of the music so well.” Classic FM

“Their range of timbres and colouration is so broad that one really does forget that there are four identical instruments. Their dynamic control, which ranges from an almost inaudible pianissimo to ranging fortissimos, is impressive.The Vida Guitar Quartetʼs ensemble throughout is exemplary and seemingly achieved with ease … their blending of tone is remarkably unified. The recording is well balanced and natural, with a warm tone quality and intimate clarity. This is a thoroughly enjoyable disc.” International Record Review