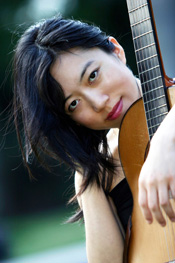 Born in Beijing, now based in the UK, Xuefei Yang (Fei) is acclaimed as one of the world’s finest classical guitarists.

Born following the Cultural Revolution, an era where Western music & instruments were banned, the fascinating story of Fei’s rise to the world stage, is that of a musical pioneer. She was the first ever guitarist in China to enter a music school, and became the first to launch an international professional career.

Prodigious musical talent was evident at all stages.

Her first public appearance at the age of ten, at the China International Guitar Festival, received such acclaim that the Spanish Ambassador in China immediately presented her with a concert guitar. The composer Rodrigo attended her debut concert in Madrid when she was fourteen and in 1995, when John Williams came to Beijing, he was so impressed with her playing that he gave two of his own Smallman guitars to her Conservatory especially for Fei and other top students to play.

As the first ever Chinese student to be awarded a full international scholarship to the Royal Academy of Music in London, Fei completed her postgraduate studies with DipRAM, and was also honored with the Principal’s Prize. In 2005, Fei received further recognition from the Royal Academy for her outstanding achievements, when they granted her the title of Associate.

As a professional musician, Fei has performed concerts in 40 countries throughout the UK, Europe, Asia and North America.

In 2003 she performed 54 concerts for the “Night of the Proms” Tour, appearing in Belgium, The Netherlands and Germany, to a total audience of over 800,000 people.

In addition to her solo career, Fei regularly appears in collaborations with other musicians. Her most recent project is with cellist Natalie Clein. They have performed in Europe and Asia, and they continue to tour this season.

Off-stage, Fei is actively expanding the guitar repertoire, with her own arrangements of pieces (with a particular interest in adding Chinese music to the repertoire), and collaborations with composers (in particular a close collaboration with British composer Stephen Goss). The result is several substantial and exciting new works for the instrument, which have found their way onto the concert stage, and into the recording studio.

Fei has an exclusive international recording contract with EMI Classics.

Fei’s third CD for EMI will be recorded with the Barcelona Symphony Orchestra for release in 2010. This disc will feature Rodrigo’s Concerto de Aranjuez, and The Albeniz Concerto written for Fei by Stephen Goss.

Prior to signing with EMI, Fei had released two other CD’s.

Fei has appeared on numerous radio and television programmes, including BBC Radio 4 Woman’s Hour, BBC Proms, BBC’s documentary “The Story of Guitar,” ITV’s Classic BRIT’s, and China Central Television, who made a biographical documentary on Fei for their classical musician series.